Thanks to all who participated in all the contests. Congratulations to the following winners!!!

KOMIKON IDOL: Ian Walter Along
Posted by Komikon Committee at 10:36 AM 1 comment:

We are trying to look all over the internet for what people thought of Komikon and here are snippets of the reviews that we saw. Some have also uploaded pictures and videos. To read the full review, just follow the link.

2. Managed to get a handful of local titles: Cadre: Amerikanong Hilaw, Baboy, The Girl Who Turned Into a Fish, and Ang Maskot. I'm liking the latter very very much. ... It was also announced that there will be another Komikon around October, and this time in a bigger venue. That means will just have enough time to read and recover from this event. Here's hoping that will have more finds (and funds to buy the finds) later this year. by kantogirl

3. Just got back. Seems 4 hours is about all I can take before shoulders collapse from carrying loot! But can't wait for next one. Might be fun to get a table next time but I don't know anyone who could share it with me. :/ by andrael

4. I was waiting for the organizers to announce the Komikon plans for that huge PICCA event in October. PICCA is the Philippine International Cartoons, Comics and Animation Festival that’s going to be held at the SM Megamall from October 15-18. I was aware of this because I’m one of those helping organize the event.

It’s a huge thing, and a big deal, so my ears were peeled towards the stage for any announcements. The only announcement I heard was my name being called to the stage, along with Sir Orvy Jundis. And as we sat there on the stage, in front of everyone in the Komikon, we were asked to announce the PICCA. Oh, I’M going to make the announcement. ha! ha!

It was also announced that another Komikon will be held on October 18 at the SM Megatrade Hall, which would be, in effect, the 4th day of the PICCA. There’s lots more to be said about this huge event, but I will make a separate post about it soon.

At 7:00pm we packed up, and as it has become our tradition after selling ELMER at the Komikon, we passed by KFC and had a bucket of chicken before we went back home.

6. Going to these great conventions require a lot of self-control even if you are not a hardcore comic collector or fan. Why? Because everyone can relate to any comic/cartoon character by Sire

Stayed for around 4 hours in the event. None of the comics sold by established and indie artists caught my eye but the place wasn't boring. Dunno why, maybe it's just because I haven't been to UP since my departure from the former company. by bryan_datenshi

8. I didn't expect the Summer Komikon to be crowded. It may not be as crowded as the November Komikon but I was surprised there are a lot of people including students having money to spend during the summer vacation. by Hazel Manzano

9. All in all the KOMIKON 2009 Summer Fiesta was a smashing success. A lot of comic enthusiasts get to have good quality works of art that they all love to read, collect, and be inspired with. To shake the hands of those who serve as a role model for aspiring artists and admiring art colleagues. by Gelboy Aldaba

10. it was my first time on the other side of the exhibition table, and i'm still a little high from the experience. whew!

thanks to all the people who bought ang maskot, especially the folks who told their friends about it, or even better, came back later with a friend in tow, going, "that's the one i was telling you about," right in front of me, thus shaming the friend into buying a copy. you guys have a special place in my heart. (Plus: hourly comics) by mcoy

11. It was…noisy, crowded, fun, and hot in the Bahay ng Alumni at U.P. Diliman. Hopefully I have something to sell on the next Komikon. (with photos) by Edgar Tadeo

12. As usual, I forgot to bring an electric fan for the booth, and thanks to my polar bear body, I was sweating buckets the minute I sat down. So, I must apologize to all the people who asked me to sign their books and I just ended up sweating on the pages.

I must also apologize to everyone that I already and forgot that already met them. (You have to help me out! I'm on old man!) by Budjette Tan

After a snack and one more round of going around the venue, I left the Summer Komikon. While I may not have fully accomplished goal number 1, I did accomplish goals 2 and 3, with a few more kicks thrown in. I went home tired, but truly satisfied with my first Komikon experience! I can’t wait for the next one! by Ryan

14. I’m glad they decided to hold an additional komikon in the summer–or, in the event that they’ve actually done so before, I’m glad I heard about it in time this year. I loved the way they identified the Marshalls this year–via speech baloons which said “Marshall Ako”

That being said, I’m very happy Komikon appears to be a resounding success this year as well. I saw the entries in the character creation contest and saw some well-executed works, and while I don’t know who won, I found myself partial to the dugong-turtle hybrid, if only due to sheer cute-ness of concept. by Bahay Talinhaga

15. Uhhh...I spent more than a meant to at Komikon today. I was planning to just look around and pick up three or four indie comics, because I'm saving up for a camera. But I'm such an easy sell that I ended up with a lot more. Seriously, as long as you look at me and tell me about your comic, I will buy it. Even if it sounds like something I wouldn't like. Even if the art is all squiggles. I'll give anything a chance. by eula_tequila

Pol Medina, Jr. was also able to launch Book 21 of his Pugad Baboy series. The Komikon team was even able to get him to sign his last-minute endorsement of the event in last Friday’s Pugad Baboy strip in PDI. (with photos) by Lyndon Gregorio

17. The sun was shining and the wasn’t a single rain cloud in sight as we lined up to get ourselves the “Early-Bird Freebies” for the early attendees. The hot weather didn’t deter us from our mission as we got hold of the loot: the official KomiKon fan (it was orange this time), a couple of flyers, and a Justice League poster! the ticket price was very cheap for Php 50, since you will be granted access to all sorts of merchandise, comics related or not!

Review and videos by iamryanm


*If we missed your review or your photos, please email us at komikon[@]gmail.com and we'll add your link to our list. Thank you very much!
Posted by Komikon Committee at 1:24 PM 1 comment:

Thank You For Joining The KOMIKON Fiesta

We would like to thank our dear sponsors for helping us in this event:

THANKS TO ALL WHO ATTENDED!!! The KOMIKON SUMMER FIESTA would be nothing without you!!! 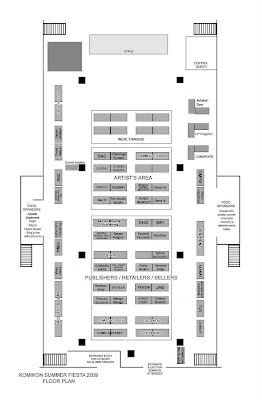 Another Reason To Go To Komikon Summer Fiesta

*Due to the volume of people, we might limit the number of books you can have signed per visit, then you'll have to line up again. Take note that PMJ might arrive at any time during the program and leave at any time as well.

Want to know what's going to happen at Komikon? Check out our schedule below

*Please note that this schedule is a guide and may be subject to deviation on the actual event.
Posted by Komikon Committee at 3:24 PM 2 comments:

1. Registration is from 10am-12noon. Register at the JACK TV table (left of the entrance). Only first 20 registrants will be accepted.
2. Contest starts at 12:30 pm
3. Contestants will create a 10x3 inch strip using any existing WWE wrestler/s based on the theme that will only be revealed when the contest starts.
4. Paper and pencils will be provided. Additional drawing materials brought by the contestants may be used.
5. After the time limit of 60 minutes, artworks will be judged. Finished or not finished.

1.Registration is from 10am-12noon. Register at the JACK TV table (left of the entrance) Only first 20 registrants will be accepted.
2.Contest starts at 1:30 pm
3.Contestants will draw any existing Character from any of JACK TV's animated series
based on the theme that will only be revealed when the contest starts.
4. Paper and pencils will be provided. Additional drawing materials brought by the contestants may be used.
5. After the time limit of 60 minutes, artworks will be judged. Finished or not finished.

from the organizers of Komikon, we bring you...

the first ever KOMIKON IDOL!

Only the first ten to register by the videoke machine located at the venue will be accepted.