About the Artists' Den - Who Organized Komikon 2005?

Original Pinoy Komiks Character Making Contest - Design your own original character that could star in your very own comic book...

On-The-Spot Comic Strip Making Contest 2005 - Want to be the next comic strip artist to join the ranks of the top members of Samahan ng Kartunista sa Pilipinas (SKP)?

Contest Free Cosplay of Filipino Characters - In order to adhere/conform with the event's theme, the contest-free cosplay event will be STRICTLY FILIPINO KOMIK CHARACTERS ONLY!!!

Posted by Komikon Committee at 9:36 PM No comments:

To all interested indie creators, if you would like to sell indies at komikon. please send the following info to metal_the_mulisha[at]hotmail.com:

NOTE: the komikon commitee needs this info to ensure that there is enough space and tables. Hence, those who have not submitted info will not be allowed to sell indies because the allotted space is for those who submitted. There will be a space just for indies. Total sales are subject to 10% tax.

So far, these are the groups that has confirmed:
leaf indies
kosensaga
point zero
Posted by Komikon Committee at 1:30 AM No comments:

KOMIKon will be holding a contest-free cosplay event and that means that there won't be any of the hassles of your usual cosplay event like registrations, judging and catwalk but unfortunately there won't be any perks that would be given to the cosplayers like dressing rooms and a cosplayer area. In order to adhere/conform with the event's theme, the contest-free cosplay event will be STRICTLY FILIPINO KOMIK CHARACTERS ONLY!!! KOMIKon won't be permitting any other categories like anime, manga, western comics, etc.

The event theme for this year is FILIPINO KOMIKS.

More details about the upcoming KOMIKon 2005 soon. Just watch out for this space ^_~

For questions, inquiries and suggestions, pls. don't hesitate to post them here or send an email to komikon[at]gmail[dot]com ^^

- Contest is open to all comic book artists except for professionals with published paid works sold in major bookstores (Comics published thru photocopiers are allowed to join).

- Contestants/ groups are limited to only one entry.

- Entries submitted by groups are required to submit the names of the individuals involved in creating the indie. Group entries with professionals on board are automatically disqualified.

- Entries should adhere to the given theme. Entries deviating from the theme shall be automatically disqualified.

- Submit 3 copies of your entry toJon Zamarat 132 a Narra Street,Project 3, Quezon Cityfrom September 1 until October 10, 2005. Entries submitted beyond October 10 shall not be accepted.

- Winners shall be announced on the event itself on October 22 and shall be notified via e-mail or phone.

- The judge’s decision is final.

- Entries should be in the form of a comic book with the following specs:o 8.5 X 6.5 (long bond paper, folded, and stapled twice in the middle)

o Entries should be placed in a short brown envelope with their name, address, phone number, and e-mail written legibly at the upper left hand corner.
o Stories must be 8 to 20 pages long (including cover)
o Please note that entries are non returnable. Entries should be reproductions only. (originals will not be accepted)
o Colored and/or black and white entries are accepted.
o There are no restrictions as to the genre or art style that can be used as long as the comic book follows the given theme.
o The story should be in the form of a one-shot title. It should be whole in itself, with a clear beginning, middle, and end. Multiple comic stories in a single entry (anthology) will not be allowed.
Posted by Komikon Committee at 2:29 PM No comments: 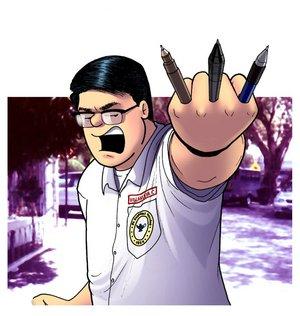 Class by Ariel Atienza
Rules:
1. The contest will be held any time through out the day of the event
2. Materials will be provided
3. An illustration of any guest artist will be shown to the contestants. They must replicate the illustration in the given time limit. The one with the closest resemblance to the original artwork will be declared the winner.
Posted by Komikon Committee at 3:03 PM No comments:

Beerkada by Lyndon Gregorio
Want to be the next comic strip artist to join the ranks of the top members of Samahan ng Kartunista sa Pilipinas (SKP)? Join the On The Spot Comic Strip contest and show your quick wit and drawing skills. Be judged by the best in the industry.

1. Register at komikon[at]gmail.com with the following info:
a. Full Name
b. Address
c. Age
d. Gender
e. School / Place of Work (Optional)
f. Contact Numbers
2. Theme of the contest will be announced at the event.
3. Bring your own drawing materials, paper will be provided.

1. Register on the day of the venue at a designated area between 10 a. m. until 12 noon.
2. Only one entry per person will be allowed.

3. Each participant must bring their own pen and paper. Paper should be letter size (8 ½ x 11).

4. The contestants will draw a comic strip based on the theme to be announced on the day of the event.

5. The standard size of the comic strip should be 3 x 10 inches. The numbers of panels may vary.

6. The contest will be from 1pm to 2pm only.
Posted by Komikon Committee at 3:01 PM No comments:

Theme for your work should be: “Heritage: Transcendence”

You may use any available medium like oil, watercolor, pen, ink, pastel, or digital

Deadline for submission of entries will be on 12noon of October 20, 2005

Judging and Awarding of prizes will be on October 22, 2005 at the KOMIKON 2005 : 1st Philippine Komiks Convention at the UP BAHAY NG ALUMNI. We are inviting everyone to attend and participate in this convention.

At 11:18 PM,
sorry for the inconvenience. The change was instructed by Level-up. comic strips...you may use as reference the ragnarok strips that are published sundays in the Phil. Inquirer. - komikon organizers

Design your own original character that could star in your very own comic book. Pick your own genre, be it a superhero, fantasy, drama, romance etc, let your imagination run wild. Include a brief description of what makes your character different from the rest. Entries could either be in Color or Black & White, manually rendered or digitally colored.

1. There will be two categories: 15 and below/16 and up.
2. Submissions should not be larger than 8.5" x11".
3. Render the character in an action pose.
4. E-mail submissions will be accepted at komikon@gmail.com with subject heading: Komikon Character Contest. Files must not exceed 300KB.
5. Please include the following information with your entry:
a. Full name
b. Address
c. Age
d. Gender
e. School/Place of work (Optional)
f. Contact numbers
g. Your character's name and other important information
7. Deadline for submission is October 10, 2003.

At 2:41 PM, Frostfire said...
This post has been removed by the author.

KOMIKON 2005 : 1st Philippine Komiks Convention aims to bring together different comic book artists/groups and publishers in a venue where they could present their talents, works and services to the public and, most importantly, to aspiring comic artists. We would like to bring in different art groups and different generations of artists for a free exchange of ideas, break down stereotypes, and broaden the scope of comics – from international to local, sequential to strips, professional to amateur, and published to independent comics. We would also like to bring to people’s awareness the current state of the Philippine comics industry.

In one day, we will hold contests to encourage participation and draw in a large attendance of people. The area will be divided to hold an exhibit area, an area for contests, an area for exhibitors’ booths/tables, an area for sponsors, registration/information area.
Posted by Komikon Committee at 1:02 AM No comments:

About the Artists' Den

Who are the Artists' Den really and why made them crazy, I mean, start KOMIKON: Philippine Komiks Convention? Read on...

The Artists’ Den is founded in the year 1999 by a group of 3 artists who dreamed of starting a group that would cater to the different art groups in the Philippines with different styles of drawing and beliefs. The artists and their followers are an unattended audience here in our country but the founding members believed in everyone’s potential to draw and reach for the stars. The group meets on a weekly basis to share views and update each other on the latest developments and news. The group also has a mailing list with more than 200 subscribers where artists convene online aside from the weekly meetings. Our organization has a long-term commitment to helping other artist groups, to promote goodwill among fellow Comic Creators and promote different works and activities among appreciative audiences.

VISION
"To give the artist aim, a higher level of empowerment and enhanced art-worth leading to powerful artwork, through apprenticeship and mentoring, propagating the passion to other artists."

In the past 6 years, the Artists’ Den has participated on various Conventions and Events. Just this year, the group has participated at 4th Philippine Toy Convention (TOYCON), 3rd New Worlds Alliance Science Fiction & Fantasy Convention (NWA SciFi Con), 1st G2 Games and Gadget Show 2005. The CORE Group has decided that it’s about time that the group organize a convention of their own, an event quite different from the previous ones they have participated in. Thus, KOMIKon is born.
Posted by Komikon Committee at 1:01 AM No comments: