Komiks 101 At UP Fine Arts Auditorium

For more information about the event please contact Rikki of LUNAROCK at 0915-4269190 or email us at komikon[@]gmail.com

KOMIKON 2008 with UP LUNAROCK and UP GRAIL has scheduled week long activities from November 17-21 to be held in the UP Campus. Watch out for further announcements.
Posted by Komikon Committee at 4:59 PM No comments:

You see their works in newspapers and various magazines every single day. Comic strips are works of art that are made up of one to four panels that bring joy to a reader by making light issues of life. Many comic strips have come and gone and little is known about the artists who make them. It’s high time to re-introduce them into this new generation.

The Samahang Kartunista ng Pilipinas now celebrates its 30th anniversary. The group was founded on March of 1978 by artists such as Larry Alcala (Slice of Life), Hugo Yonzon Jr. (Sakay and Moy, Little Toto), editorial cartoonists Edgar Soller, Boy Togonon, Edd Aragon, Pol Galvez, Tito Milambiling (Kusyo at Buyok), and Roni Santiago (Baltic and Co., Planet Op Di Eyps). The group worked with various NGO’s, government leaders, malls and restaurants, and schools. Annually, members have been sent to Japan to join a forum for Asian cartoonists. Under the current president, Boboy Yonzon III, SKP has a long list of activities planned such as publishing art books; attending conventions abroad, holding local events, exhibits and contests for its members. With the changing times the group wishes to expand its membership especially with the growing number or online comic artists. 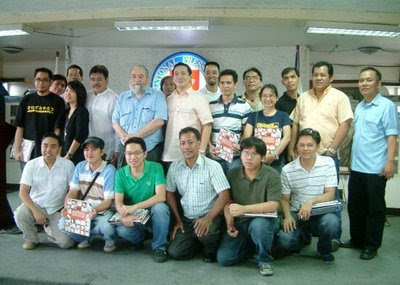 Learn more about the rich history of the lives behind the comic strips. The 4th Philippine Komiks Convetion (KOMIKON) highlights the Samahang Kartunista ng Pilipinas on November 22, Saturday at the U.P. Bahay ng Alumni, U.P. Diliman, Quezon City. Get to know the artists and grab the opportunity to have caricatures drawn. The limited edition Samahang Kartunista ng Pilipinas Roster Book published last July will be available at the event (Php 500 for hardbound, Php 350 for paperbound). 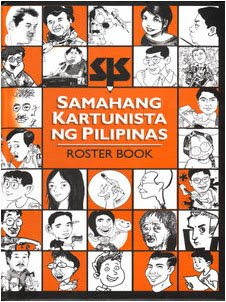 Also visit the SKP multiply account at http://skpinas.multiply.com
Posted by Komikon Committee at 2:20 PM No comments:

Please take note that the deadline for submitting entries to the following contests is on October 31, 2008. For more details, please visit the respective contest pages:

For the Comic Creation and Make the Page, submit 3 copies (please don't send your original works) via AIR Mail* to:

KOMIKON 2008: MAKE THE PAGE CONTEST
c/o Patrick Jungco
2 Ruby Street Southville, Don Antonio Heights,
Diliman, Quezon City 1127
*send us an email at komikon[@]gmail.com to confirm if we have received it

or drop them off at our designated Store Partners:
Character Creation entries must be emailed to komikon[@]gmail.com with the complete information.

This year’s theme is :