Who says comics in the Philippines is dead when people like our guest of honor keep it alive?

Gerry Alanguilan, pride of San Pablo City in Laguna, is the artist for local titles Wasted, Johnny Balbona, Humanis Rex!, Timawa and ELMER. He also contributed to anthologies like Siglo: Freedom, Siglo: Passion and Filipino Komiks. His website, komikero.com, features his many works, videos and an online comics museum. The Philippine Comics Art Museum is a collection and proof of the rich comic heritage the Philippines had decades ago. He also became a professor at the College of St. Benilde. There he taught;Comics Illustration; for one term. Gerry has been invited to speak at numerous talks in different colleges and universities. 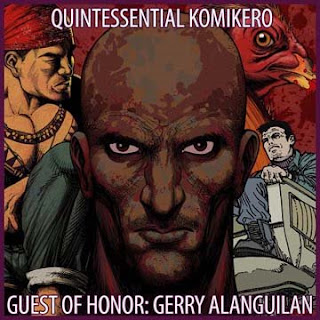 Aside from his local works, he is known for his contributions in the United States comic industry. He is known as inker for titles like Wetworks, X-Men, Superman: Birthright, Wolverine, High Roads, Fantastic Four, and Silent Dragon. He has also worked alongside with Leinil Francis Yu and Whilce Portacio.

Gerry Alanguilan will be one of the panelists at the KOMIKS 101 - a talk to be held on November 17, 2008 (Monday) at the UP Fine Arts Auditorium, UP Diliman. He'll be talking on the topic "Komiks in Education - Including comics into the curriculum"; which will be from 1:00pm - 4:00pm. He, along with Elbert Or and Jamie Bautista, will also have a lecture, "Comic Writing for Artists", on November 20, 2008 (Thursday) from 2:30pm-4:30pm at the College of Fine Arts in UP Diliman.

Get to know him even more at the 4th Annual Filipino Komiks Covention (KOMIKON) 2008 on November 22 (Saturday) at the UP Bahay ng Alumni, UP Diliman, Quezon City. Gerry will take the stage for a Q&A as part of the day's program. Have the opportunity to purchase his comics and have them signed.

Visit his site at http://www.komikero.com/ for more information of Gerry Alanguilan. To know details about the KOMIKON 2008, visit http://komikon.blogspot.com/ or http://komikon.deviantart.com/ or email us at komikon[@]gmail.com
Posted by Komikon Committee at 5:39 PM